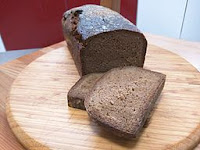 A reader of one of my other sites sent in a question about rye bread and weight loss.  "Are there any health benefits of rye bread?" she asked. "Is rye the healthiest bread, or at least a healthier bread? Is rye bread good for diabetics? Does rye bread have gluten?"

When I look in the mirror I have to be flattered that someone respects my intellect enough to ask me about rye bread for weight loss, but the truth is that rye flour makes probably the best whole grain bread.

First I'll get the technical question out of the way. The reason rye bread is favored for dieters is that it is anti-inflammatory. Actually, the interactions between the kinds of carbohydrates we eat and how our bodies produce inflammatory compounds are very complicated.

The differences between the two groups were striking. The group that had eaten wheat bread or "white" bread, potatoes, and oatmeal had 71 different genes related to inflammation "switched on" by their diets. About 1/3 of the mass of belly fat is fluid and white blood cells that get stuck in the twists and turns of blood vessels between fatty tissues. Even if you don't eat extra calories, this inflammation-inducing diet can cause you to gain weight. The group that had gotten its carbohydrates from rye bread had 52 different genes related to inflammation "switched off" by their diets.

Fat cells that aren't as inflamed aren't as large. That means don't use as much insulin. That leaves more insulin in the bloodstream to keep blood sugar levels normal. That's a great thing for diabetics. And because there is less inflammation, there are fewer white blood cells and less fluid trapped in belly fat tissue. This group tended to lose weight even if they were eating a few too many calories. But that wasn't all.

In my article on sea buckthorn oil and weight loss tomorrow I mention the role of an enzyme called hormone-sensitive lipase in storing and releasing fat. Hormone-sensitive lipase causes fatty acids to solidify inside fat cells. They can't pass out of the cell because they are in a solid form, rather than a liquid form. This means that even if you diet and exercise, your muscles will burn sugar instead of fat because the fat stays locked inside fat cells.

In the Finnish study, rye bread consumption was tied to lower levels activity of the fat storage (or fat lock-up) enzyme. It's still necessary to do the activities that burn the fat, but getting your carbohydrates from rye bread and leaving wheat, potatoes, and oats off your meal plan makes burning fat easier. But even if you aren't dieting, there is a lot to like about rye bread.

It is hard to imagine the cuisines of northern Europe without rye bread. Whether it is the tan rye bread you might find on a hotel breakfast buffet in Copenhagen or the purple pumpernickel bread you can find in every bakery in Berlin, northern Europeans eat rye bread--nearly 180 pounds (about 80 kilos) per person per year.

Rye grows well in climates that too cool and damp for wheat. It bakes into a moist and malty bread that keeps from going stale not just for days but for weeks and even months, depending on the time of year. And if you don't care for rye bread, there are always rye crisps for making open-faced sandwiches that are almost carbohydrate free.

But you don't have to use rye bread with deli food. It is good with butter or jam, or just jam, and even with cold veggies, cream cheese, fish, or pickles. There are rye breads studded with walnuts, or flaxseeds, or (traditionally) caraway seeds, or pumpkin seeds. In Germany the "vegetable" added to the rye bread sometimes is ham (which requires refrigeration). I've eaten rye bread with ice cream, but that's really kind of an acquired taste.

Does Rye Bread Have Gluten?

Traditional rye bread is made with no fat or oil. There is never any bleached flour, with its potentially toxic bromides. There are only rye flour, a little bit of sugar for the yeast to grow in, water, salt, baker's yeast, and the sourdough starter--plus a bit of wheat flour. Wheat flour is added precisely because it contains gluten.

There are brands of rye bread that contain no wheat flour at all, but they are, well, chewy. Really chewy. But they keep for months if you don't open the package, even without preservatives. If you are gluten sensitive or if you have celiac disease, you will have to avoid any brand of rye bread that contains wheat flour. Some American "rye" breads are actually more wheat than rye. Be sure to read the label.

The Secret to Success Eating Rye Bread on Your Diet

Rye bread is healthy bread, but it is possible to go wrong. A Czech rye bread recipe calls for 50 rye crisps, a pound (450 g) of Emmenthaler cheese grated fine, a stick (1/4 pound/110 g) of butter, some grainy mustard, a little dill, and some caraway seeds. Pulse the rye crisps in a food processor until broken up but not powdery.

Add enough water, about a cup (240 ml) to the mix to make a dough, and work in the cheese, butter, salt, mustard, and caraway.  Form bite-sized balls of rye, butter, and cheese and place on wax paper. Refrigerate for at least two hours and serve. The mixture stays fresh for about two days.

This Czech rye bread recipe is delicious, but it's really not likely to help you lose weight. Sorry--you'll have to forego the butter and the cheese to use rye bread in weight loss plans. But if you just use rye for your carbohydrate portions instead of white bread, wheat bread, potatoes, and oatmeal products and don't change anything else, you may notice a lighter feeling around the waist. And if you can cut back calories and exercise even a little, you will lose weight faster than on any other reduced-calorie diet plan. Rye isn't a miracle food. But it's really good for you.

Photo credit: By Maksym Kozlenko (Own work) [CC BY-SA 4.0 (http://creativecommons.org/licenses/by-sa/4.0)], via Wikimedia Commons.
Posted by Robert Rister at 11:51 AM