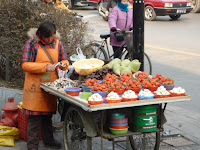 A very large study from China published in the New England Journal of Medicine finds that about 16% of deaths from cardiovascular disease (heart attack or stroke) can be attributed to "fruit deficiency." That figure is very close to the 17% of cardiovascular deaths other studies estimate could be prevented if older people stopped smoking. But does not eating enough fruit really account for deaths from heart attacks?


Apparently an apple a day really does keep the doctor away.

At the beginning of this study, about 500,000 Chinese adults who had no history of cardiovascular disease were asked how often they consumed any of a variety of fresh fruits. Chinese people who consumed more fruit were different from non-fruit eaters but not in the ways you might expect. Waist circumference and BMI were higher in the fruit eaters. Fruit eaters were more likely to live in urban areas, and they also ate more meat, which, in China, may suggest that eating fruit is an indicator of better overall nutrition. Fruit eaters also had a higher income, more education, and were less likely to smoke or drink alcohol.

At the end of 3,000,000 person-years of follow up, the researchers noted that approximately 1 in 1000 fruit eaters had died of cardiovascular disease, compared to about 3.7 per 1000 non-fruit eaters. Adjusting for smoking, drinking, exposure to pollution, and other factors, the research team concluded that not eating fruit was associated with approximately 16% greater risk of death from heart and blood vessel disease. It could be that there is something in fruit that protects against heart disease, but it could also be that there is something that isn't in fruit (sodium, saturated fat) that causes heart disease.

Either way, this is one more study that finds that eating an occasional piece of fruit should be, pardon the pun, appealing. Small amounts of fruit seem to be beneficial in preventing not just heart disease but also asthma, and even can help (in servings of no more than 1 piece per day) in regulating blood sugar levels in type 2 diabetes.

Photo by Vmenkov via Wikimedia Commons.