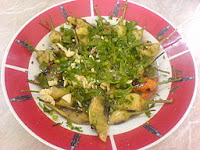 What is it about Cheetos and Ding Dongs and stale donuts and similar junk foods that make them so appealing to so many people with type 2 diabetes? Is it that diabetics have no taste, or that they lose their sense of taste if their disease goes uncontrolled? Actually diabetes itself robs diabetics of their ability to taste and enjoy food--but there are many things diabetics can do about that, so they actually enjoy healthy diabetic snacks.

One of the reasons so many type 2 diabetics eat too much is that they cannot taste their food. Years of high blood sugar levels interfere with nerve function all over the body. There can be nerve damage in the hands, in the feet, in the heart, in the sex organs, and also in the salivary glands.

Changes in salivation happen so slowly that many type 2's just do not know that they suffer a condition called xerostomia, or dry mouth. Their salivary glands don't water when they chew their food, so the full flavor and aroma in food is not released. Many type 2 diabetics lose their ability to taste certain flavors, especially sweetness, so they naturally want more, more, more.

The good news is that just a few months of careful blood sugar control can restore both normal salivation and normal taste sensation in most type 2's. And in the meantime it is possible to change your food so you can enjoy it much more.

Up until a few decades ago, scientists used to think that the different kinds of taste buds resided in different part of the tongue. The tongue sense sour flavors on one side, scientists believed, and salty flavors on the other.

Sweet tastes were sensed up front, and bitter tastes were sensed in the back. If you had diabetes, of course, the nerves at the tip of your tongue would deteriorate first, so you would lose your ability to taste sweetness while you still have your ability to taste bitterness. Diabetics would want more and more sugar, causing higher and higher blood sugar levels, leading to still further damage to the sense of taste.

Nowadays scientists know that the taste buds on the tongue are not as clearly segregated as once thought. There are “islands” of taste sensitivity scattered across the tongue, although there are still definite differences in the intensity of taste perceptions on the different parts of the tongue.

These islands of taste perception work something like the pixels on a computer or TV screen. The brain combines information from the tongue with information from aromas sense by smell to create the sensory experience of food.

Just as you would see a strange picture on your screen if one of the colors went out, many type 2 diabetics sense strange flavors in their food when their mouths don't water or their nerves for taste perception are damaged. You get strange taste sensations when the sweet, salty, sour, and bitter receptors on your tongue are not balanced. If you also lack salivation, the you will not enjoy the full benefits of aroma.

If food tends to taste like cotton or cardboard, chances are that you have a deficiency of salivation, also known as xerostomia or dry mouth. Diabetes causes dry mouth by the same process that it causes neuropathy in the hands and feet. High blood sugar levels, over time, simply wear out the nerves that control salivation. They cannot make new mitochondria fast enough to power the nerve all the way down to its terminus in the salivary gland.

Ironically, diabetics who suffer dry mouth often want more and more of the dry, salty, high-carb foods that never satisfy their needs for taste, but that do satisfy the need for food with a crunch.

The way most diabetic nutritionists will tell you to satisfy your need for crunchy food (and it's not a bad one) is to eat crisp, raw vegetables, such as carrot sticks, celery sticks, radishes, turnip root, and jicama. Vegetables for diabetics are supposed to be a freebie. It is theoretically possible to eat too many carrot sticks, but in the real world, people are usually satiated long before carb counts would become a problem for controlling blood sugar levels. Vegetables are a diabetic-friendly food.

These raw plant foods and their kin provide a range of nutrients, a spectrum of flavors, and also natural moisture. They are better for you than chips, crisps, and crackers.

A Way to Eat Less Your Nutritionist Won't Tell You About

But if you simply must have your munchies, here is a way to eat less:

Eat a smaller number of crackers, crisps, or chips with visible grains of salt on the surface.

Don't eat the whole bag. It's never a good thing to be overshooting your sodium levels. But if you eat the smallest possible serving of a salty snack that makes your mouth water, you will enjoy the food.

Of course, if the food itself is tasteless, then you will just want to eat and eat and eat. Don't suffer tasteless food. Throw out what has no nutrition and no taste. Eat slowly, taste each bite, and see if you really want more. You may find that you are satisfied with less. Covering your salty snacks with cheesy spreads and salsas, by the way, dilutes the power of the salt to make your mouth water.

Photo credit: Thanks to Biso for sharing the salad photo on Wikimedia Commons.
Posted by Robert Rister at 6:11 AM