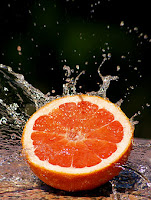 Do you remember the grapefruit fad? Maybe you are not old enough to recall the time when losing weight by eating grapefruit at every meal was in all the tabloids (alongside the martinis and cream and tuna fish diets), but in the 1950's, 1960's, and 1970's, grapefruit was the fad diet equivalent of today's cabbage soup diet.

But it turns out there really was something to it. Six researchers at the Shriners Burn Hospital and Massachusetts General Hospital in Boston, working with researchers at Harvard and Hebrew University, have found that the chemical that makes grapefruit bitter changes how fat cells use and store fat.

The chemical that has the effect on fat cells is known as naringenin. There has already been a clinical study that found that people who take a concentrated naringenin supplement experience significant lowering of LDL ("bad") cholesterol. This research team decided to see if the effects in the liver, where cholesterol is made, also occurred in fat cells.

What the scientists found was that the grapefruit chemical stimulated the genes that make the enzymes that burn fat and cholesterol. At the same time, naringenin stimulated the PPAR-alpha gene that triggers the burning of fat when we aren't eating, and the PPAR-gamma gene that makes cells more sensitive to insulin and lowers blood sugar levels.

The drugs Actos and Avandia stimulate PPAR-gamma, but they don't stimulate PPAR-alpha. They in effect lower blood sugar levels by shoving the sugar into fat cells. The chemical from grapefruit, on the other hand, lowers blood sugar levels by increasing insulin sensitivity, but it also activates fat burning genes in fat cells. The researchers said that eating grapefruit would have many of the benefits associated with long-term fasting, without the need for long-term fasting.

And because naringenin focuses its effects on the liver, there was a very special benefit for people who have diabetes and also hepatitis B or hepatitis C. The hepatitis viruses need fatty acids in liver cells to function. Grapefruit triggers the breakdown of these fats so the viruses can't get them.

So, should you run out and get jug of grapefruit juice and start chugging it down?

And, secondly, it's important to remember that grapefruit juice also can elevate your blood sugar levels. This undoes the benefits of increasing insulin sensitivity. Try drinking grapefruit juice instead of, rather than in addition to, other carbohydrates in your daily diet. If you need some help controlling those other carbohydrates, consider healthy diabetic snacks.

You may also be interested in my post on diabetes foods to avoid.
Posted by Robert Rister at 1:47 PM